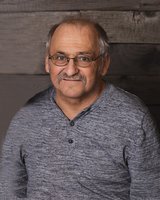 Kevin Joseph Weinkauf passed away peacefully at the Lloydminster Hospital, Lloydminster, Saskatchewan on Friday, February 7, 2020 at the age of 59 years. Left to cherish his memory is: his wife of 39 years, Linda; his children, Marcus (Jenna) and their daughter, Penelope; Jodi-Lynn (Corey) Wildeman and their children, Cayden, Jayce and Jenaeya; Kimberly (Landon) Bodnar and their children, Kiptyn, Kaleb and Kyron; Michael and his daughter, Charlette. Kevin is also survived by: his parents, Marcus and Bernie Weinkauf; his siblings, Doug (Cathy), Tim (Sandy), Charlene (Pius Heffner), Glenn, Kory and Sherry (Jamie Janke); and numerous nieces and nephews. Kevin was predeceased by: his in-laws, Bill and Greta Oliver; his two brothers, Allan and Wayne; his paternal grandparents, Alex and Anna Weinkauf; his maternal grandparents, Phillip and Elizabeth Volk; as well as many other relatives and friends. The Prayer Vigil will be held from St. Anthony's Roman Catholic Church, Lloydminster, Alberta on Wednesday, February 12, 2020 at 7:00 PM. The Funeral Service for Kevin will be conducted from St. Anthony's Roman Catholic Church, Lloydminster, Alberta on Thursday, February 13, 2020 at 1:00 PM. Donations in memory of Kevin may be made to the Diabetes Association Canada or Lori Craven Memorial.