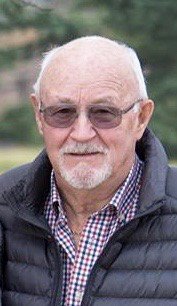 It is with great sadness that we announce the passing of William (Bill) Grassick on May 11th, 2020 at the age of 78 years.

Bill was born in 1941 near Grande Prairie, Alberta and passed away in the Vermilion, Alberta Health Centre - Palliative Care Unit on May 11th, 2020 with his wife by his side.

Bill was born to Harold and Gladys Grassick on August 5, 1941. He grew up in McLennon, Alberta and moved with his family to Sexsmith, Alberta where his father ran the local livery barn. After graduation he entered the work force and took a job at the plywood plant in Grande Prairie. He moved on to a partsman position for Sargent Motors, and then eventually carried out a 35 year career with R. Angus and Finning Tractor in Grande Prairie until his retirement in 1998. When boredom got the best of him, Bill went to work part-time selling for Overhead Door for another 15 years. Settling into retirement for a second time Bill and Connie moved in 2015 to Lloydminster, Alberta where they called home until his passing.

Bill met the love of his life, Connie MacDonald in 1983 and they were married on July 27, 1985. Bill loved the outdoors and was an avid river boater, and skidooing/quadding enthusiast and was one of the oldest remaining original members of the G.P. River Rats. Bill and Connie spent much of their time together developing their camping retreat at Buffalo Lakes north of Grande Prairie. They took great pride in the home away from home they created and loved dearly, bringing friends and family together at “The Property” for many years.

Bill will be greatly missed and fondly remembered by all those whose lives he touched. He loved his family and they will eternally miss him and the man he was to the very end.

Due to our current health regulations a celebration of Bill's life will be held at a future date that allows for family and friends to gather.

In lieu of flowers, donations can be made to Vermilion Health Centre - Palliative Care Unit.

Bill's memorial card can be viewed or downloaded from the link below.

Share Your Memory of
Bill
Upload Your Memory View All Memories
Be the first to upload a memory!
Share A Memory
Plant a Tree