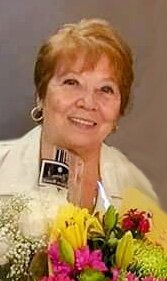 Svetlana Danilovna Maloman passed away at home in Lloydminster, Alberta, October 10, 2021 at the age of 84 years.

Donations in memory of Svetlana may be made to Canadian Cancer Society.

Svetlana's funeral card can be viewed or downloaded from the link below.

Share Your Memory of
Svetlana
Upload Your Memory View All Memories
Be the first to upload a memory!
Share A Memory
Plant a Tree