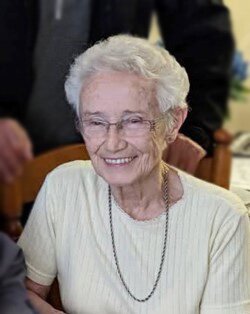 Please share a memory of Sheila to include in a keepsake book for family and friends.
View Tribute Book

It is with great sadness that we announce the passing of Sheila Grace Christie at the Lloydminster Hospital, Lloydminster, Saskatchewan on February 6, 2022 at the age of 88 years.

Sheila was predeceased by: her husband, Andrew; brother, Bruce Davidson; and her sister, Jean Tolley.

A Celebration of life for Sheila will be held at a later date.

In lieu of flowers, donations in Sheila’s memory can be made to Lloydminster Regional Health Foundation - Palliative Care or charity of the donors choice

Share Your Memory of
Sheila
Upload Your Memory View All Memories
Be the first to upload a memory!
Share A Memory
Plant a Tree