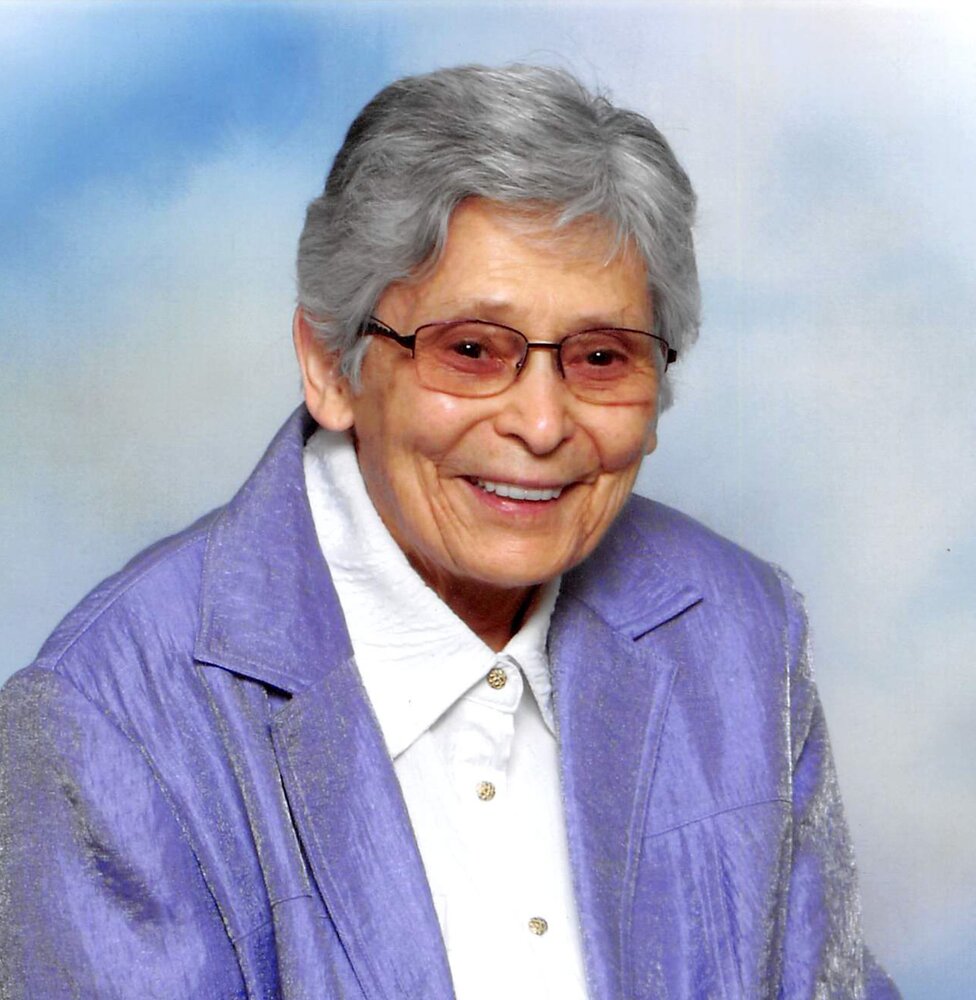 Please share a memory of Hazel to include in a keepsake book for family and friends.
View Tribute Book

Hazel May Esther Rieser, nee Sidwell, passed away February 8, 2022 at the Jubilee Home in Lloydminster, Saskatchewan at the age of 89 years.

Hazel was born in the RM of Britannia to Roy and Esther Sidwell, and was the eighth of ten children.  Roy operated the Frenchman Butte ferry during the time Hazel was growing up, and she was part of a tight-knit family of brothers, sisters, aunts, uncles, cousins, nieces and nephews.  Hazel was a teacher, and started on that path in high school where she proctored exams for younger students.  She then attended the Saskatoon Teacher’s College, which launched her into a lifelong career as an educator.

Hazel also had an adventurous side.  As a young adult, she travelled to Switzerland in a time when this was rare for young women, and was married in Geneva to Bernhard Rieser.  They had one child, Michael.  They later separated and Hazel returned to Canada where she returned to teaching.  She touched many lives in the places she taught which include, among others, The Yukon, British Columbia, and later Ontario and locally Frenchman Butte School, Onion Lake First Nation and Fort Pitt Farms Christian Community.

Hazel was most at peace in the presence of the North Saskatchewan River, and lived many years on the edge of “Yankee Bend” – so named for the many farming pioneers that emigrated to the area from the United States. She had spent the last several years in seniors’ housing and care homes in  Lloydminster.  She was very active in the Frenchman Butte Museum Society, and as a founding member took great pleasure in seeing the progress that was made from the early beginnings as a result of hard work of many in the community.  She also took great pleasure in family history, and spent many hours with her great niece Carol Light contributing information for a history of the Frenchman Butte Ferry, among many other things.

Hazel was a co-owner of a cabin at Little Fishing Lake along with her sister Edith Wall and her husband Robert.  Many wonderful summers were spent at the lake during retirement, and her sister Jessie, her husband Howard, and several of her family also had places there and shared many wonderful experiences.

More than anything Hazel delighted in her grandchildren Ryan and Nicole.  She took great pleasure in her visits, and frequently went to see them during their childhoods in Anchorage, Alaska and the Saanich Peninsula, British Columbia.  She was generous with her time and love, and was enormously proud as they progressed into the individuals they are today. She had a big part in making them the people they are now. She had much more to give, and did so with many great (and great-great) nieces and nephews who she gave her time as she did for her grandchildren.  She delighted in family.

Hazel is survived by: her sister, Edith of Parksville, BC; her son, Michael and his wife, Deborah Rieser of Anchorage, Alaska; grandson, Ryan of Portland, Oregon; and granddaughter, Nicole of Corpus Christi, Texas; and many nieces and nephews.

Hazel is predeceased by: her sisters, Ruth, Gladys, and Jessie; and brothers, Grant, Keith, Harold, Orville, and Steve.

A Viewing will be held at the McCaw Funeral Chapel, Lloydminster, Alberta on Monday, February 14, 2022 from 1:00 - 2:00 PM (MST), with the Funeral Service to follow at 2:00 PM (MST).  The interment will follow the service at Albian (North Bend) Cemetery, North Bend, Saskatchewan. There will also be a drop in gathering at the Hillmond Seniors Centre after the service.

Donations in memory of Hazel may be made to UNICEF Canada Children's Charity or Canadian Cancer Society.

Hazel's funeral card can be viewed or downloaded from the link below.

Share Your Memory of
Hazel
Upload Your Memory View All Memories
Be the first to upload a memory!
Share A Memory
Plant a Tree