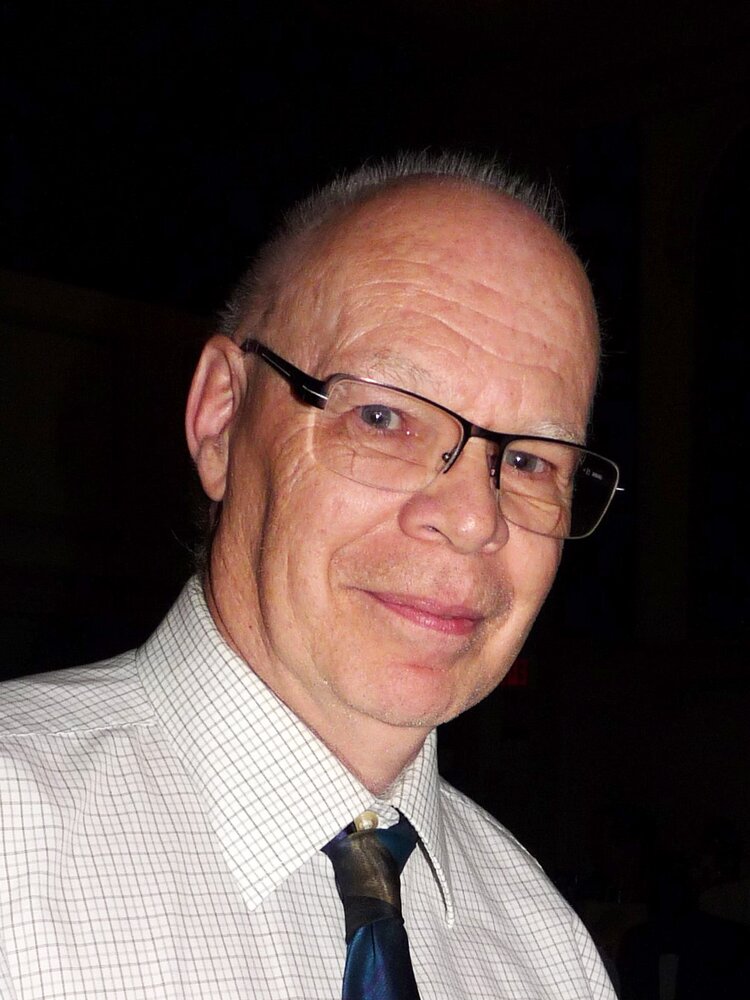 Norman Joseph Doyle was born August 1,1951 in Coronation, AB and passed away, April 15, 2022 at the Mazankowski Heart Institute in Edmonton, AB at the age of 70 years.

Kim Doyle and her children, Austin and Brynn; Shawn and Ashlee Doyle and their sons, Owen and Grayson.

Norman was predeceased by: his parents, Martin and Beth Doyle.

The Celebration of Life for Norman will be conducted from McCaw Funeral Chapel, Lloydminster, AB, Saturday, April 23,2022 at 2:00 PM. The service will be live streamed and posted on McCaw Funeral Service website under Norman's obituary at the time of service.

The Interment will be in the Veteran Cemetery at a later date.

Donations in memory of Norman may be made to Mazankowski Heart Institute or donor's charity of choice.

Norman's memorial card can be viewed or downloaded from the link below.

Norman was very quiet but often surprised us with things that he would say or do. The first surprise for Mom and Dad was his early arrival. Complications at birth lead to his physical disability, but, that physical disability required him to develop the coping skills necessary to deal with the many challenges life sent his way (ie how do you tie your shoes with just one hand?). Norman attended Veteran school from grades 1 through 9, and attended Coronation, Olds, and O’Leary High Schools.

Following high school Norman attended Olds College where he studied Agriculture and Horticulture. After College he returned home to Veteran to figure out a career path. It was then the Veteran Bottle Depot was born, with Norman as the owner/operator. He spent countless hours counting, sorting and loading bottles.  His nieces and nephews remember helping Uncle Norman in the bottle depot during visits to Veteran, (at least in their minds they were helping).  Many evenings the doorbell would ring at supper time and someone would just have to get rid of their bottles at that exact moment.  Norman would always get up from the table and look after his customers, and he only grumbled a little.

In 2002 Mom and Dad decided to finally retire and Norman moved with them to Lloydminster. In 2004, after Dad’s passing, Mom decided it would be best if she moved into the Dr. Hemstock Residence. We asked Norman if he felt he wanted to live there as well. “I guess that would be all right”, was the reply as we so often heard from him. He never made much of a fuss about anything, he just lived life one day at a time.

Norman enjoyed his time at the Dr. Hemstock and we were very grateful that he was living there to keep an eye on Mom. It was due to Norman’s presence that Mom was able to remain at the Dr. Hemstock as long as she did. After Mom was moved to the Dr. Cook Long Term Care facility Norman would walk over daily to visit. Many of the staff and residents at the Dr. Hemstock have told us these last few days, what a “Gentle Soul” Norman was and how well he looked after our Mom. As a family we probably never expressed our thanks to him for always keeping a watchful eye on Mom, but it was very much appreciated.

Norman was the artistic one in the family as you can see from the paintings displayed on the table outside of the chapel.  He never pursued art as a career, he enjoyed art on a personal level. Norman spent many hours at the Dr. Hemstock painting and doing jigsaw puzzles to pass the time. He even won a pumpkin carving contest by painting a picture of a blue bikini on his pumpkin instead of carving it.  The residents voted for his painted pumpkin to win first place.  He enjoyed socializing with family and friends. Norman spent many evenings discing at the Veteran and Hemaruka halls and the staff at the Dr. Hemstock even tell us he was a sought- after team mate as he was very “Quietly Competitive” during activities there, hence his nickname of Storm.  Apparently being left-handed gave you somewhat of an edge for some activities.  He spent time with his Aunt,Uncle and cousins, the Wuest’s, in Calgary during his years growing up, and he spent time with Uncle Jack Doyle in Olds during the summer months sometimes. Norman was especially lucky to have been able to accompany Alan and Cindy on a few trips to British Columbia to visit our cousins and Auntie Irene (who Passed away at 105 years young). In 2011, the year Norman turned 60 years old, Alan and Cindy took him to BC for the first time. It was a year of firsts for Norman. He experienced his first trip outside of Alberta, his first air plane ride, his first cancelled flight, his first Sky Train ride, his first Sea Bus ride, his first Ferry trip to Vancouver Island and back, and dipped his fingers in the ocean for the very first time. Norman also experienced a cruise on a River Boat, touring White Rock and many other sights in the area on numerous other trips. Unfortunately, Covid hit and the trips to BC came to a halt but they were always fondly remembered by Norman. Trips back to Veteran for Homecomings and even funerals over the years were always enjoyed as it meant a chance to reconnect with old friends. Norman always tried to attend the weddings of the nieces and nephews as they too, were an opportunity to visit with family that he didn’t often get to see. Norman was especially fond of his great nieces and nephews. He loved to just sit and watch the little ones play or sometimes to play dolls or trucks with them. Brynn would crawl over to Unkee Norman and he would sit her on his knee and the two of them would enjoy a rare, quiet moment together. Norman was especially pleased to have shared his birthday with his great nephew Hunter.

On March 31st Norman sustained a very significant heart attack.  He was taken to hospital in Lloydminster and was then air lifted to Edmonton for treatment that day.  Alan and Cindy have been Norman’s primary care givers for the last several years and once again they didn’t falter.  They went to Edmonton and were Norman’s designated visitors for the last two weeks of his life.  Alan was his Floyd, and Cindy his Florence, Nightengale that is.  They went to the hospital regularly to visit and when they weren’t at the hospital they kept in touch with the staff via phone.  They were excellent at sending updates to the rest of us to keep us up to date on Norman’s condition.  Our family would like to extend a very heartfelt thank you to Alan and Cindy for all the care they provided for Norman, especially during the last two weeks of his life.

Share Your Memory of
Norman
Upload Your Memory View All Memories
Be the first to upload a memory!
Share A Memory
Plant a Tree