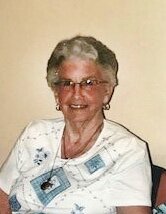 It is with heartfelt sadness, but relief, that we announce the passing of our mother, grandmother and great grandmother, Helen Elizabeth Morlidge on Tuesday, October 18, 2022 in Saskatoon, Saskatchewan, with family at her side.

Helen attended Normal School in Saskatoon after high school. She taught school at Rex for one year before she was married. While her children were young, she often worked as a substitute teacher in both the public and separate school systems. In the late 1960s, she decided it was time to go back to university and obtain her teaching degree, so she began by doing correspondence courses at home. She then went to summer school for a couple summers, and then took a sabbatical and went to university where she completed her degree. She taught full time for over twenty-five years for the Lloydminster Separate School board. She mostly taught grade four, as that was her favorite.

The Funeral Service for Helen will be conducted from Grace United Church, Lloydminster, Alberta on Monday, October 24, 2022 at 2:00 PM. If you are unable to attend, the service will be livestreamed and posted on McCaw Funeral Service website under Helen's obituary at time of service.

Donations in memory of Helen may be made to donor's charity of choice.

Helen's funeral card can be viewed or downloaded from the link below.

Share Your Memory of
Helen
Upload Your Memory View All Memories
Be the first to upload a memory!
Share A Memory
Plant a Tree