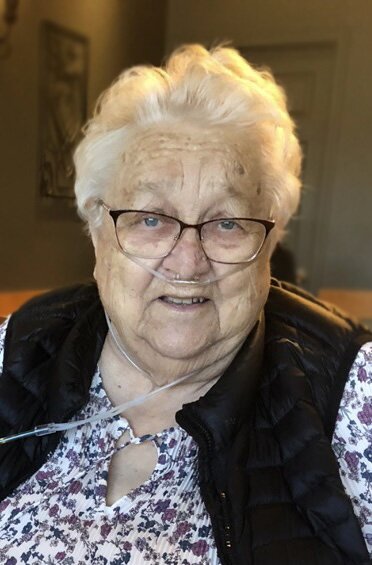 Alison McLaren, formerly of Fairview, AB, recently of Lloydminster AB, passed away peacefully in the Lloydminster Hospital on November 26, 2022, at the age of 87.

Alison was predeceased by: her parents, Gordon and Nellie Archer (Dodson); spouse and love of her life, Gordon (Dode) McLaren; two sons, Dave and Donnie McLaren; and two brothers, Ashley and Bill Archer.

Born in Lamont, AB, October 17, 1935, Alison later moved to Fairview where she met her love, Gordon McLaren.  They farmed in the Green Island District, south of Fairview, for many years.  After Dode’s passing in 2011 she moved to town and then to the Harvest Lodge.  She relocated to Lloydminster this past year to be closer to her daughters near Kitscoty, AB.

The Celebration of Life and Internment will take place in Fairview, AB, in the later part of May 2023. Full obituary and service details will be published, in the Fairview Post, in the spring.

Donations, in lieu of flowers, can be made to: The Fairview Health Complex Foundation, Box 2141, Fairview, AB T0H 1L0.

Share Your Memory of
Alison
Upload Your Memory View All Memories
Be the first to upload a memory!
Share A Memory
Plant a Tree