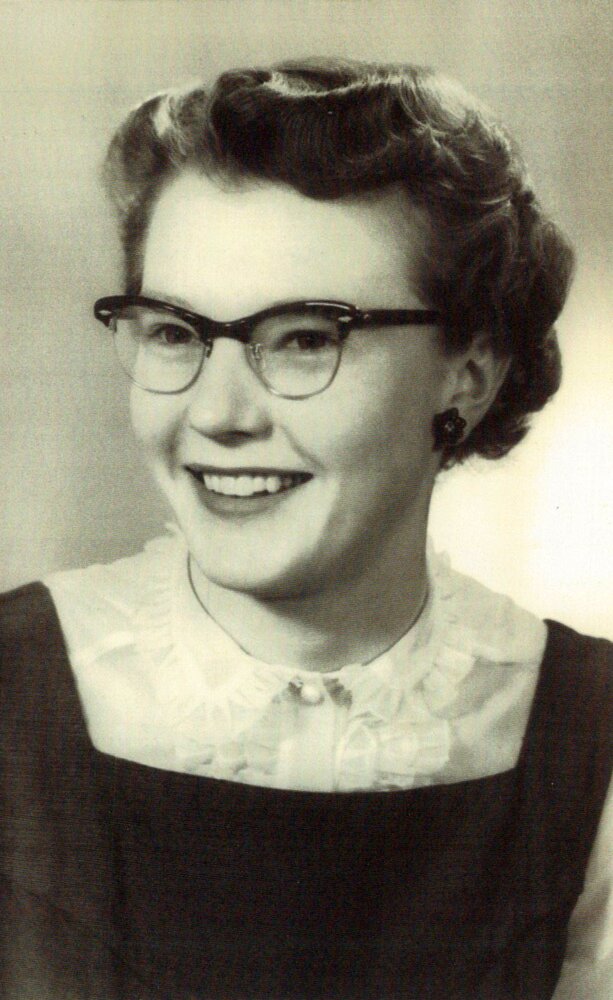 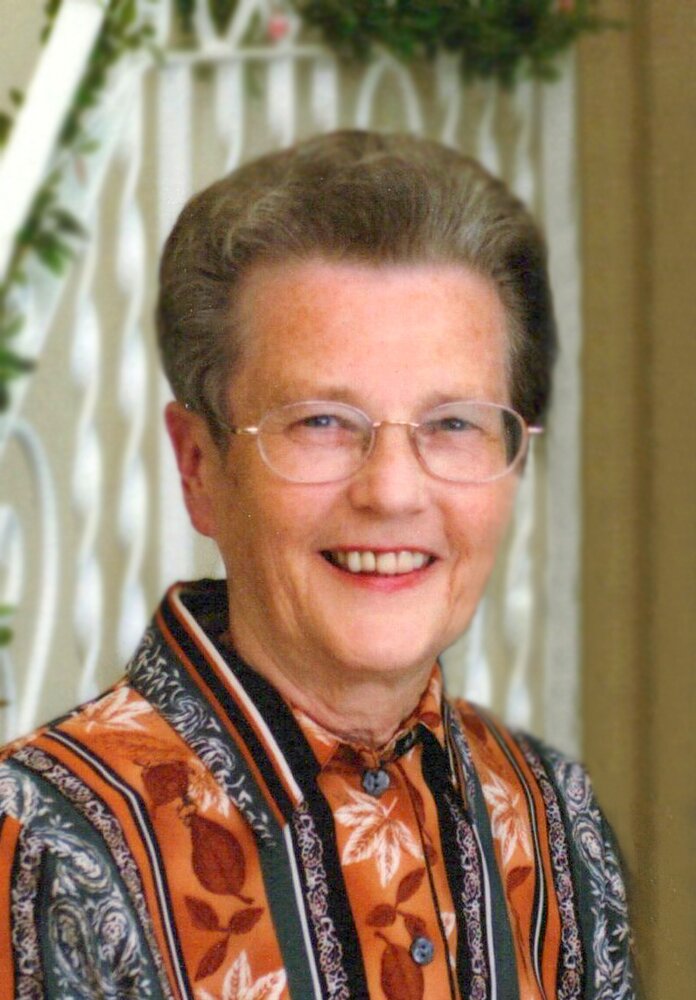 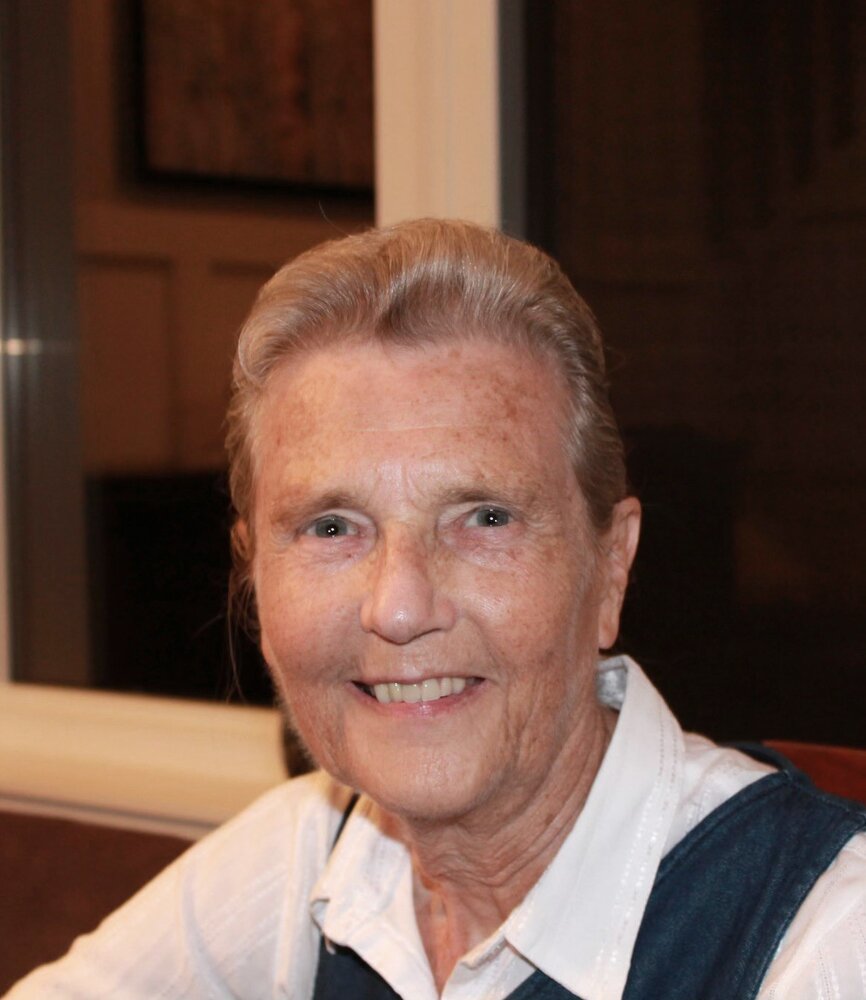 The Funeral Service for Leola will be conducted from St. Anthony's Roman Catholic Church, Lloydminster, Alberta on Monday, December 19, 2022 at 10:30 AM.

Donations in memory of Leola may be made to Lori Craven Memorial Fund.

Leola's funeral card can be viewed or downloaded from the link below.

Good morning, everyone.  My name is Dustin Fallscheer.  I would like to thank you for joining us this morning as we celebrate the life of Leola Jean Brost.

Trying to sum up someone’s life in a few minutes is a challenge and it has made me do a lot of thinking about Grandma in the last few days, and I keep coming back to one word that best described Grandma, strong. And I use that word with love, respect, and admiration because Grandma was strong willed, strong minded, and had a strong love for her friends and family.

Leola was born on September 21, 1935, to George and Lucy Pagett in Neilburg, Saskatchewan.  I don’t imagine life in small town Saskatchewan in the 30s and 40s was easy, but Leola always spoke fondly of her extended family and lifelong friends that came from those early years.  Leola’s strong will and determination was evident from an early age.  One such example was shared by Leola’s cousin Gene who remembered that in the fall of 1946, Neilburg tore up all the wooden sidewalks on Main Street and replaced them with concrete. Next spring the hardware store got in a shipment of metal roller skates that clipped on to shoes. Leola always loved new technology and was one of the first in town to buy a pair. And because the sidewalks were now so smooth, she immediately started roller skating up and down main street Neilburg. As Gene remembers, she kept that up all summer until she was officially the Roller Queen of Neilburg.

Leola may have come across as very staid and correct, but there was a side of her that was, fascinated by new technology, and she was not afraid to step out, take on new challenge and learn something new.  Gene recalled when Christmas tree lights became available after the War and Leola immediately acquired a set. She soon discovered bubble lights which then became a passion for her. She was always fiddling with these lights - changing bulbs, rearranging colors, and bulb types. One afternoon after school he was with her at her house, and she was fussing with her string of lights. Gene was watching when suddenly one of her fingers got stuck in an empty socket. She was bouncing around; her hair was on end, and he thought she was done for. But her wild antics shook her finger loose and she collapsed on the chesterfield. She was much more careful with her 'pet lights' after that but she never lost her fascination with Christmas lights and especially bubble lights.

Leola’s strong will and sense for adventure followed well into her later years.  In 1966, she purchased the first Honda scooter model that was made, and it still resides in the garage.  In her early 50s, she decided it was time to take up downhill skiing, golf, and start playing in a marching band.  She wasn’t afraid to pick up a computer, learn about email, the internet, or Facebook.

Grandma had a wide range of interests and hobbies, but drinking was not one of them.  In June of 1952 all the high school kids from Neilburg went to an evening dance at Carruthers. Mildred had graduated from Grade 12 and to celebrate had purchased a bottle of spirits. Gene thinks it was a fruit liqueur - probably cherry brandy. Leola was not a drinker but because it was Mildred's celebration, she had a taste or two. It hit her hard and at the dance she was the life of the party. Everyone was amazed and bemused because no one had ever seen Leola like this before. She lasted the evening and made it home. But next day she was appalled with what had happened - no one ever saw her like that again.

We all know that Leola was very strong minded, and she had unwavering opinions on many topics.  The City’s trees on her boulevard, bubbly bacon, and daylight savings time where just a few.  And once her mind was made up, no matter how hard you tried, you were not going to get her to change.  Her opinions on people were much the same, if you were a friend, you were a friend for life.  Gene & Sonja, Mildred & Myron, Pat & Lucille, Paul & Kay, Ross & Chris, Joe & Elaine, I could continue to go on, but if you were part of Leola’s crew, there wasn’t anything that she wasn’t willing to do for you.  I have gotten to know some over the years, and others not so much, but I could tell by the way she talked about all her friends how much she deeply cared for them.

About 5 years ago, she informed me, that she had two favourite days of the week, Tuesday’s, and Friday’s.  Tuesdays was coffee with the ladies, and Fridays were lunches with a few of us.  She enjoyed getting out to visit and catch up with others, she said it was what kept her going.

Leola moved to Lloydminster in the early 50’s and began her working career at the Sydney Roofing Company.  It was there where she would meet a young gentleman from Primate, SK named Matt Brost, who she would go onto spend the next 60 years of her life with.  Leola’s greatest strength was the strong love that she had for her and Matt’s family, a family that has grown to include four children, eight grandchildren, and seven great grandchildren.

Leola was fortunate enough to get to know and spend time with her seven great grandchildren, Maggie, Landen, Matthew, Brady, Emma, Ben & Eva, and they were lucky to get to spend time with her.  Grandma’s house meant planting and digging up the garden, homemade bread, piano lessons, vanilla ice cream, and putting out peanuts for the birds.

I am sure most of you knew this already, but Leola’s grandkids could do no wrong and we have a little family joke that illustrates it.  For over 20 years, we have entered a family team in the Lloydminster Oilmen’s curling bonspiel.  Over the years, the team has consisted of a couple non-curlers, her grandsons, and a couple curlers, her husband, and sons.  Well, we soon learned that it didn’t matter how bad the non-curlers missed shots and messed up the front of the end, if the curlers on the backend didn’t pull off a miracle shot, and we gave up points, it was there fault.  Dallas, Dalyn, Amanda, Scott, Tyler, Elijah & Aveena, I am sure you knew this already, but she was proud of each of us.  Hockey, volleyball, football, baseball, soccer, graduations, convocations, and weddings, she didn’t miss much.  She was excited to see us all grow, find our way, and start our lives and families, wherever that may be.

Sandra, Daryl, Winnifred, and Kirk had the honour of calling her mom, and what a great example she was.  She worked.  After Sydney Roofing, it was at Joe McLean’s law office, then the Courthouse and RCMP detachment.  She was involved.  She played piano for the youth choirs, was involved in the marching band, as well as a part time chauffeur to all the kid’s activities; basketball, baseball, diving, curling, with four children, the list would have gone on.  She was kind, caring, and giving. At various times throughout the kid’s childhood, they had different relatives live with them.  Her mother Lucy, her Uncle Buck, her cousin Lynden and two nieces Norma and Judy.

But most importantly, she loved her children and she worked hard for them.  As parents, we want to make life a little bit easier for our children and provide them opportunities that we might not have been afforded.  Leola and Matt did just that.  Down payments for homes, tuitions, business loans, painting, renovating, you name it they were there for their family.  They did it because they loved their family and this was their reward, everyone seated here in the first few rows.

Grandma looked forward to spending time with her children.  Each spring, she was excited for the Oilmen’s Bonspiel.  She really could have cared less about the curling, but she was excited by the opportunity to have all four kids together.

In addition to those family gatherings, she looked forward to Friday lunches with Sandra, Sunday night phone calls from Daryl, 5 o’clock wine visits with Winnifred, and having Kirk in town spend time at home with her and fix her computer.  Those things all made her happy.

We are here today to say goodbye and celebrate Leola.  Whether you called her a friend, mom, grandma, or great grandma, we are fortunate to have had you in our lives.   So, thank you Leola, for all that you have given and a shared with us.  We will all miss you.

Share Your Memory of
Leola
Upload Your Memory View All Memories
Be the first to upload a memory!
Share A Memory
Plant a Tree