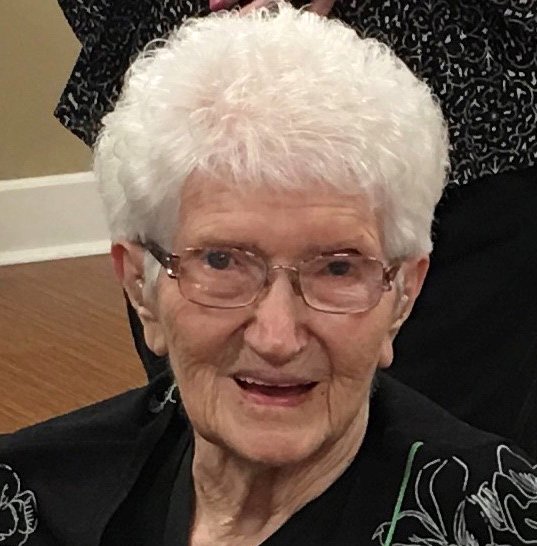 Doris Elaine Laverty passed away at Lloydminster Continuing Care Centre, Lloydminster, Alberta, May 30, 2021, at the age of 97 years.

Doris was born to Peter and Anna Powers on the family farm near Marsden, Saskatchewan on December 8, 1923. As the sixth of seven children, she had many fond memories of her early years, learning the value of hard work and the enjoyment of living a simple life on the farm with a close and loving family. In 1943, while teaching school in Senlac, Saskatchewan, she met and married Wesley Laverty. They resided in Chauvin, Alberta for many years where they had their three children, Gary, Karen and Dennis. In 1963, the family moved to Lloydminster to start a new business venture which was Lloydminster Car Sales. For many years, Doris worked part-time at Lloydminster Co-op Ladies Wear and was also a very active member in her church, The Community of Christ, where she met many lifelong friends.

Doris spent much of her life giving and volunteering in many different capacities, such as cook in the kitchen at Church camps and Kid's Cancer camps; playing piano and organ for Church for 50 years; leading Kid's Choir; assisting children with reading skills at different elementary schools; tutoring for ESL students; cooking for Loaves and Fishes community meal; as well as helping in any way she could with any cause that was near and dear to her. Her greatest passion in life was spending time with her grandchildren and great grandchildren. She was Grandmother to many as she had a love for all children and had special connections with so many kids throughout her years.

After Wes was diagnosed with Kidney failure and traveling to Edmonton and Saskatoon 156 times per year for Dialysis, she realized that fighting for a Dialysis machine was a necessity for this area and worked tirelessly to make it a reality. Today the Lloydminster Hospital can boast a very successful Dialysis program and Doris was immensely proud to have played a part in that achievement.

Wes passed away after 51 years of marriage, and in 2002 Doris married her long-time friend, Morris Johnstone. They were happily married for 17 years until Morris passed on in 2019.

Doris suffered her later years from Parkinson's Disease and was not able to carry on with the things she valued most, which was tirelessly working and doing for herself and others. Sitting idly by while others worked and did things for her was extremely hard for her to accept as her mind was still so sharp up to the very end. She waited patiently for the day when she would be greeted and ushered to the place that God had prepared for her, and that she was worthy of.

Doris' family would like to extend their heartfelt appreciation to the staff at Lloydminster Continuing Care and Pioneer House for the care and love they have shown for the past several years. She was so very fond of many of the staff and cared about them like her family. We all know she had her "favorites" who reciprocated the love right back to her and we are eternally grateful that during this past year when her family could not be by her side, that she had those people in her life every day.

A public viewing will be held on Thursday, June 3, 2021 from 11:00 AM until 12:00 PM at McCaw Funeral Chapel, Lloydminster, Alberta. A Private Family Service in memory of Doris will follow.

Donations in memory of Doris may be made to Lloydminster Regional Health Foundation-Dialysis Unit or donor's charity of choice.

Share Your Memory of
Doris
Upload Your Memory View All Memories
Be the first to upload a memory!
Share A Memory
Plant a Tree